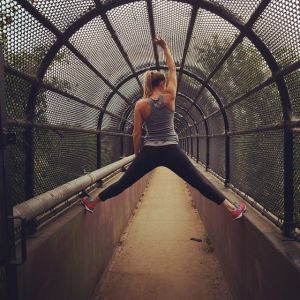 I’m always humbled, and a little surprised, by the people who tell me that I’m inspiring. Because honestly, it’s not like I wake up every morning and say WOW.. I’m feeling so inspiring today! Most of the time, okay– 99.9% of the time– it’s a lot less glamorous than it looks.

And it all started with me faking it.

…I know, I know. Just bear with me. What I mean is this: Don’t let ANYONE tell you that you can’t do X because YZ. You can’t be a baker because you burn your croissants. You can’t run a marathon because you can’t go 1 mile without wheezing. You can’t inspire others because you’re not inspiring yourself.

Remember my last post about mindset? Right. So step one, change that darn mindset. Stop it already with the negativity.. cool? Did you stop? Thanks.

If you don’t believe those visions you have for your life can actually come true and be your reality, FAKE IT! Start ACTING like you’re a world-class baker, you’re the top finisher in the NYC Marathon, you’re a motivational speaker because you’ve just inspired that many people to live a more empowered life.

So, what does faking it look like? Walk taller, smile genuinely, listen more than you speak, learn what you can about the field in which you want to excel. If it requires professional schooling, plan out a roadmap of how you’d make that a possibility. Night school? Online classes? If you rock at your dream as much as you can fake it, you’ll be able to pay that schooling back in a brief period of time.

Post motivational pictures, stories, quotes on your social media. Be that outlet that people go to when they’re having a sucky day. I struggle with everyday stressors as much as the next person, but I don’t let my online life reflect that. I keep it positive, because that’s what I want to portray to my network. At the beginning, the thought of helping someone change their life through inspiration was terrifying to me, frankly. So I faked it. My heart– my desire to help people–was genuine, but I had to start by faking the courage to be a leader. Guess what? After a bit of time, I didn’t have to fake it anymore. I started fully believing I could help people, and even if some of my clients quit or didn’t see results, it wasn’t because of the sub-par support or coaching I gave them. It was their choice, and that freed me from feeling like I failed as a coach.

I heard somewhere that all it takes is 20 seconds of courage to change your life.  So fake it. Even if you’re scared shitless, fake your courage for 20 flipping seconds. You’ll look back when you’ve made it & nod your head in appreciation at your younger, determined self.

Oh, and if you’re still scared? Most people won’t know if you’ve “messed up” along the way as long as you smile and keep going. So keep baking. Keep running. Keep inspiring.

Fake it til you make it. Because eventually, if you keep truckin’, the land of “making it” is not so far off and unreachable.